As Winter moves into Spring, many of you will be venturing out into nature more. If you have access to the sea, perhaps you will be planning some coastal walks. From quiet estuaries and towering cliffs to shingle ridges and busy seaside promenades England’s 7,723 miles of coastline is varied and spectacular. As well as the scenery, coastal wildlife can be equally diverse.

As Winter moves into Spring, many of you will be venturing out into nature more. If you have access to the sea, perhaps you will be planning some coastal walks. From quiet estuaries and towering cliffs to shingle ridges and busy seaside promenades England’s 7,723 miles of coastline is varied and spectacular. As well as the scenery, coastal wildlife can be equally diverse.

Plants amongst the Sea Spray

Although not inundated by daily tides, living just beyond the reach of the waves can still be a harsh place to survive. Plants growing in habitats fringing the coast must be well adapted to salt laden air and spray drenched soils. Marram Grass (Ammophila arenaria) which grows on the front of sand dunes is one such plant. Its waxy, flexible leaf blades can bend in the salty wind and are ‘in-rolled’ so that valuable moisture is trapped. The inner blade surface is also grooved. Its stomata, the tiny pores through which gases and water vapour are exchanged, are sunk at the base of these grooves. Marram also has a really extensive root system so it can take up scarce nutrients and water. These dense mats of roots help the grass anchor in the mobile sand, in turn holding the sand dunes together. 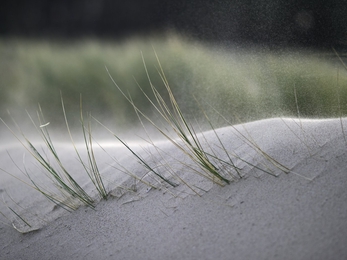 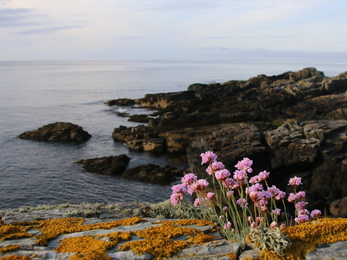 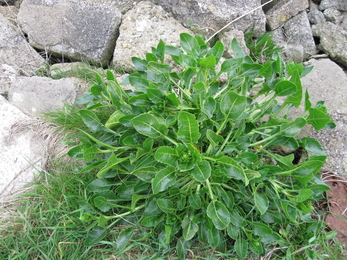 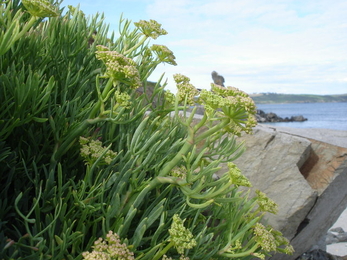 Other common coastal plants will grow in small pockets of soil between rocky outcrops, in stone walls or between piles of cobbles.  One such plant is Sea Beet (Beta vulgaris sub spp maritima), a member of the spinach family with large thick, waxy leaves. It is edible and can be cooked like other greens or stir fried. It needs to be washed well first as it can be quite salty. Rock Samphire (Crithmum maritimum) is also edible and can be found growing out of cracks in rocks or cliff faces. It has succulent cactus-like leaves with a strong citrus taste. Another plant particularly common on cliff tops is Sea Thrift or Sea Pink (Armeria maritima) with its beautiful heads of pink flowers, sprouting out a cushion-like mound of leaves, that quiver in the sea breezes.

Another incredible organism found on spray drenched cliffs is the lichen. This is in fact two species living together – a fungus (which forms the main structure you can see) and an alga which lives embedded in the fungal tissue. The fungus protects the lichen from the harsh conditions found on rock surfaces and in return the alga photosynthesises to make sugars for the fungus to feed on. Inland lichens are found on tree trunks, walls and gravestones, but on the coast they love to grow on cliffs and seashore boulders. Some species can live below the high tide mark but most cling on just above the waves in the  ‘splash zone’. They come in many colours from black and grey through to green, yellow and orange. Some, like the ‘Sunburst’ Lichen (Xanthoria parietina), are particularly common on the tops of rocky ridges. It is thought this is because they flourish on the nutrients that leach out of droppings that are often deposited there by perching gulls.

Insects by the Ocean

Although there are very few insects that can actually live in the sea, there are plenty that will take advantage of maritime habitats. Many species of ground, rove and tiger beetles live on coastal vegetation or in the thin soil of cliff tops or dunes.  Burrowing bees and wasps such as the Field Digger Wasp (Mellinus arvensis) or species of Carder Bee, can be found digging  into sandy paths and banks. Some butterflies, such as the Grayling (Hipparchia semele), are also particularly common basking on sandy or stony coast paths. Ants will often create ant hills on cliff top turf that has been finely grazed by rabbits or sheep. Other coastal fringe invertebrates include sea slaters (Ligia oceanica),maritime cousins of woodlice, and spiders, such as the Common Zebra Spider (Salticus scenicus), which scurries over shingle banks. Voracious predators such as the Wolf Spider (Pardosa perita) also lurk on the edge of salt marshes and shingle ridges devouring anything they can catch. 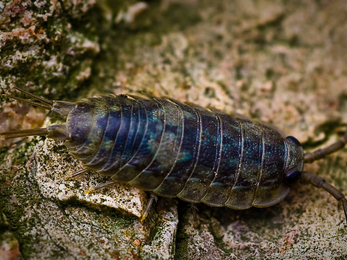 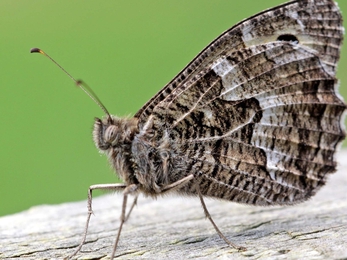 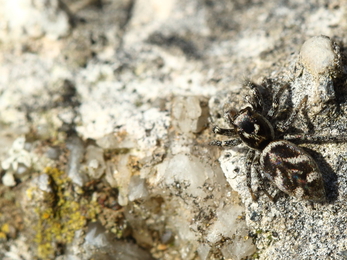 These rich invertebrate communities in turn provide food for birds.  The small thrush-like Rock Pipit (Anthus petrosus) and two members of the fly catcher family, the Stonechat (Saxicola rubicola), and in summer, the Wheatear (Oenanthe oenanthe), are all regularly sighted perching on rocky outcrops, on hardy gorse bushes or on lonely, stunted trees. 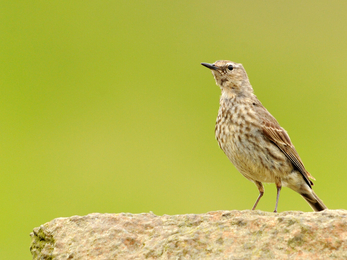 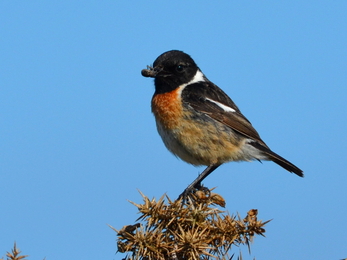 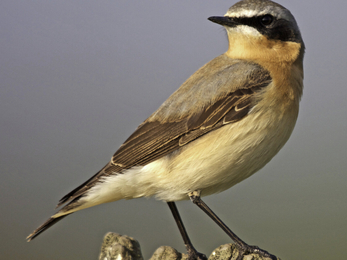 Some birds more often associated with mountainous or rocky terrains inland are equally at home along sea cliffs. Especially on western coasts, Ravens (Corvus corax) can be seen tumbling along in the thermals making their distinctive ‘cronking’ calls. If you are really lucky you may glimpse speedy predators like Peregrine Falcons (Falco peregrinus) that nest on high cliff ledges. They will hunt down other birds like Rock Doves (Columba livia) which are the wild ancestors of the common feral pigeon that thrive in our town centres.

A coast path or cliff top is also a great vantage point to watch out for waders, gulls and wildfowl, that are often forced further up the beach foraging amongst the seaweed or in the mud as the tide rises. One of the most easily spotted is the Oystercatcher (Haematopus ostralegus) a large black and white wader with red legs and a powerful orange bill that feeds on marine snails like limpets. Another more recent arrival from the continent is the Little Egret (Egretta garzetta), a small white heron with long black legs and brilliant yellow feet, that will catch small fish in rock pools and creeks and inlets on salt marsh or estuaries. It may be increasingly common due to climate change.

If you are observant in certain places around England you may even spot other top predators  swimming by including marine mammals such seals, porpoises or dolphins or if you are really lucky you may see otters that are just as happy foraging in quiet tidal backwaters as along inland rivers. So, if you take the time to pause and look, a walk by the sea can often be a real wildlife treat.

2021 is the official launch of the England Coast Path with 2,795 miles of new coastal rights of way now open all around the country, so what better time to head out and see for yourself what coastal critters you can spot.

For more information on our wonderful coast visit the page below:

Join the conversation and keep up to date with the latest news on our social media channels.