Will you help us care for this rare and beautiful butterfly?

The Large Blue needs your help

The Large Blue butterfly is considered one of Somerset’s most engaging conservation stories.

It wasn’t until the late 1970s that its fascinating and complex life cycle was discovered. Requiring wild thyme to lay its eggs on, and parasitically relying on a tiny red ant - Myrmica sabuleti, it’s unsurprising that the Large Blue always teetered on the brink of extinction. Numbers had started dropping in the 1900s and the species was finally declared extinct in the UK in 1979.

In the early 1980s eggs donated by the Swedish Nature Conservancy were introduced into sites in the south west like our own Green Down in the Polden Hills, which on paper had the perfect conditions. Thanks to careful conservation management by staff and volunteers, by 2000 the Large Blue had finally regained a small UK foothold and was once again seen at a few special sites, including our own Green Down Nature Reserve in the Polden Hills, which now is home to the UK’s largest population.

But despite this, the Large Blue’s future is still far from secure. 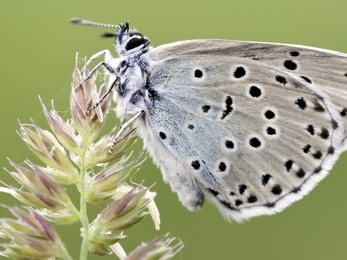 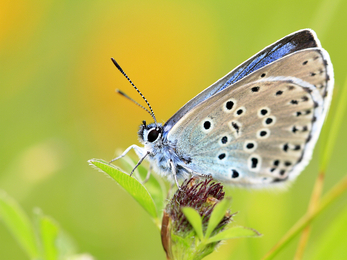 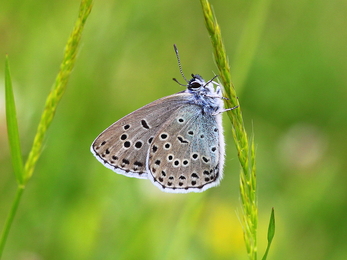 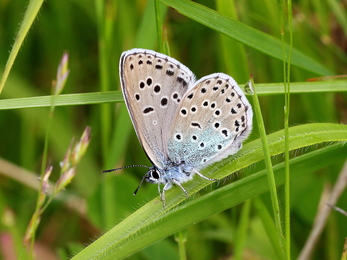 For the Large Blue to continue to do well, conditions must be just right. It’s complicated, costly and time-consuming, and requires careful monitoring of conditions and numbers, plus regular work on site to give these special butterflies their best chance from year to year. Sadly, despite everything we do to maintain their fragile habitat, the increasingly unpredictable weather is affecting their survival.

It is only by keeping numbers high that we can secure the Large Blue’s future. We simply can’t let them disappear from Somerset again. We must invest in Green Down’s ongoing management to make sure conditions there are just right and increase our specialist monitoring. Our ambition is to build the population sufficiently, so colonies of Large Blue can naturally colonise or be introduced to our other reserves in the Poldens, which would be a fantastic step in securing their future.

Please donate today so Green Down is the best home it can be for the Large Blue butterfly!

Other ways to donate

You can also donate securely by telephoning 01823 652429 and speaking to Zoë, or send a cheque made payable to Somerset Wildlife Trust to 34 Wellington Road, Taunton, Somerset, TA1 5AW. Please specify that your cheque is for Large Blue Appeal.

Every donation, whatever the size, will make a real difference. Thank you so much for helping the Large Blue and nature to recover in Somerset.

We are applying to the Viridor Credits landfill tax credit scheme for a grant to ensure we have everything in place for effective conservation grazing of our reserves adjacent to Green Down, which will help the Large Blue population across the Polden Hills. If successful, a small proportion of Large Blue appeal donations will be paid directly to a landfill operator as a contributing third party (CTP) payment to release this grant, which would mean we are able to double the impact of our Large Blue appeal across our Polden reserves. From our previous appeals, we would expect to raise the CTP needed from donations made by supporters who are unable to Gift Aid their donation. Should this not be the case, we will inform you that we will not claim Gift Aid on your donation where you have asked us to do so when making it.

Join the conversation and keep up to date with the latest news on our social media channels.